About Barbara Dietrich, who did not wait for someone else to save the world

It was the most unusual interview in my career. I thought nothing could surprise me after 40 years in journalism, but I was wrong. At some point it seemed we were talking to some unique mirror, which reflected a person different in appearance but with identical mind. Sometimes we even spoke in unison, as not only our thoughts coincided, but our words as well. That usually happens to spouses who have lived with each other for a long time, or to colleagues who worked together so well they began thinking in the same terms. However, that is atypical for a person from a different country, who knows you for a month… It is as if Popov and Marconi would meet and begin discussing the invention of radio with the same words. It was the special pleasure of recognising oneself in another person. Sometimes we laughed at how incredible the coincidences seemed. At times, we even wanted to cry overcome by emotion. 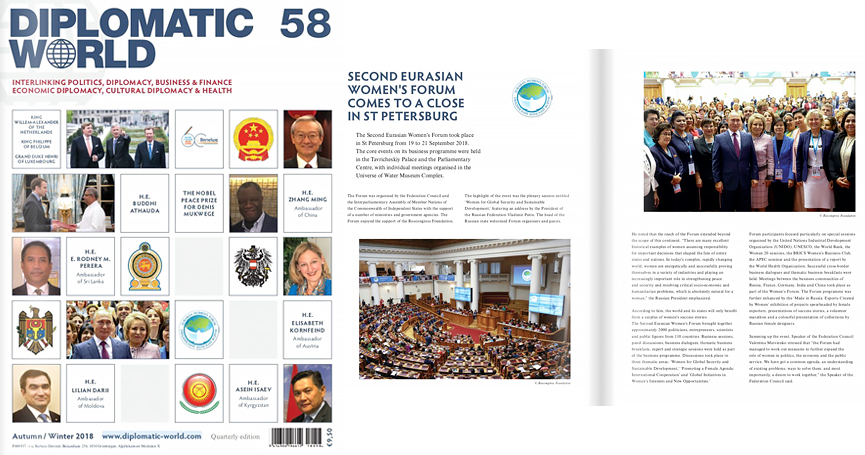 It seemed like I suddenly found myself in an Indian film, and we would soon understand we all were sisters accidentally scattered around the globe. However, it is the time to present you the soulmates and explain what happened.

During the Second EWF, Marina Volynkina, the Head of our Eurasian Women’s Community, met Barbara Dietrich, CEO of Diplomatic World and a wonderful woman. The cooperation among like minds continued after the Forum. As a result, the memorandum called ‘Responsible Media for the Global Peace and Sustainable Development’ was created. Thus, Ms. Dietrich, being the initiator of the document, invited our website’s team to Brussels to solemnly sign the memorandum and discuss further cooperation.

Two days in a row, we were communicating from morning to night while promoting new ideas and collaborative projects, which will surprise everyone in the nearest future. Surely, it was not an interview, it was cooperative brainstorming. Whenever we remembered that we wanted to write about Barbara Dietrich as well and I got a chance to ask her the questions, I felt embarrassed. I understood no words I prepared were viable. It was not acceptable to shackle such sophisticated and diverse woman with the interview format. Ms. Dietrich is a journalist herself. Thus, she got used to open up other people while staying in the background and talking within the right track. She passionately shared about her work for a magazine alongside with her projects in modern art. Barbara Dietrich is a supervisor of Living Tomorrow series of projects and installations. She was however shy when speaking about herself. It turned out her family faced a number of severe problems at some point. At the time, Barbara understood the avalanche of troubles could only be stopped with good and noble deeds. Thus, she began fighting for peace; and she did it beautifully and creatively, as modern art specialists do. 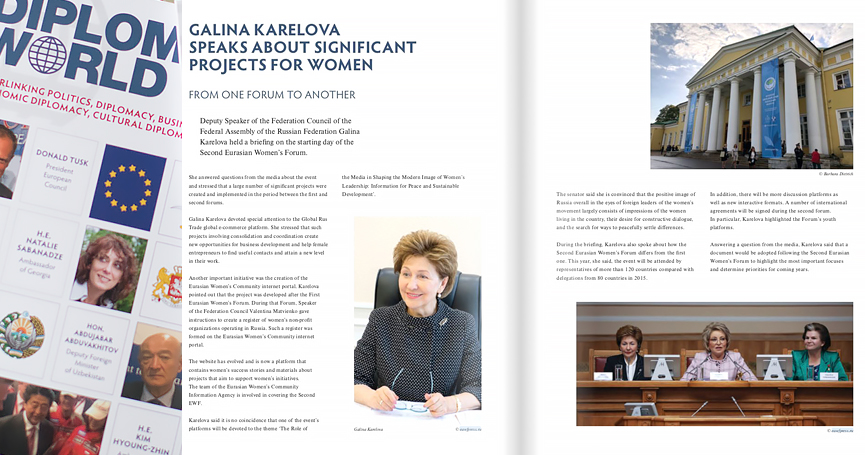 Diplomatic World seems to be a dry and official name (which can relate to the Eurasian Women’s Community as well). However, it is not just a series of ceremonial activities and reports on them. Sophisticated contents, interviews with wonderful people, historical and artistic excursions, occasional surprising topics and their twists. Those are why Diplomatic World has large circulation and considerable credibility. The best-known politicians are eagerly giving it interviews:

“- Barbara, who is the newsmaker of your dreams you would like to talk to?

- I do not have such dreams, I just arrange everything and interview everyone I want.”

Nothing and no one can stop this petite woman on her path to peace. The magazine’s leitmotif is the following: people should understand each other, come to an agreement, preserve peace, and make our world a better place. By the way, a new issue of Diplomatic World has already been published. Four articles in this issue of the magazine are dedicated to the Second Eurasian Women’s Forum including the discussion platform that we organised. 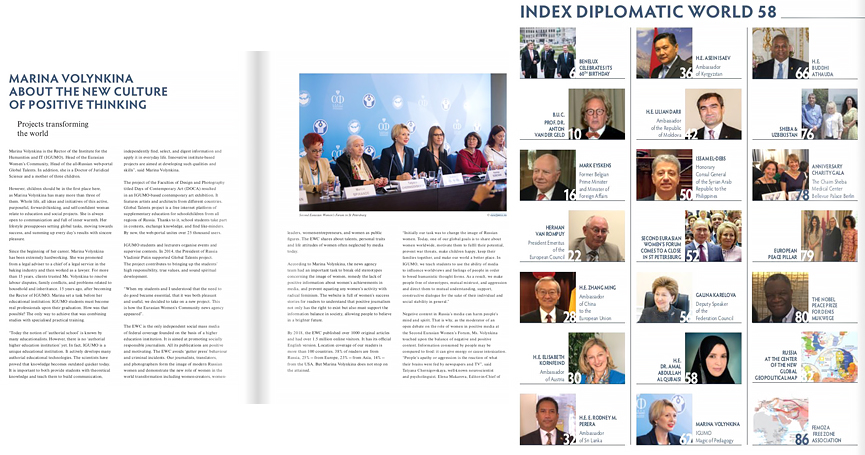 At some point, Ms. Dietrich understood that regardless of one’s energy and creativeness, such problem cannot be solved through one magazine. Here it is essential to team up with other mass media. That is when the Forum’s historic meeting happened. By that moment, we reached almost the same conclusions and organised a discussion platform supervised by Marina Volynkina, the head of EWC. We understood each other at first sight and from the first word.

It is interesting, how many of the heroines mentioned at the EWF tell similar stories of their mission. Some follow traditions, which go back in history (paying the tithe), for someone it is all about religion, some just had the impulse, and others were tackling their own problems while helping those in similar situations. Thus, each of them makes our world a better place with all the available tools. I also made my Christmas promise: I will be a good girl, just provide me and my nearest and dearest with sound health and the strength to actualise everything we have planned. I remember Irina Viner, Russia’s famous rhythmic gymnastics coach, called all creative people conductors of the ideas from above. Whenever one is lazy and sorry for themselves without carrying out one’s mission, different problems and illnesses will occur. That is why it is essential to not just do your work, but to try doing more than possible. What is interesting, one often succeeds in it. It is for a certain reason that we write about such people. Barbara Dietrich outstandingly represents those people. 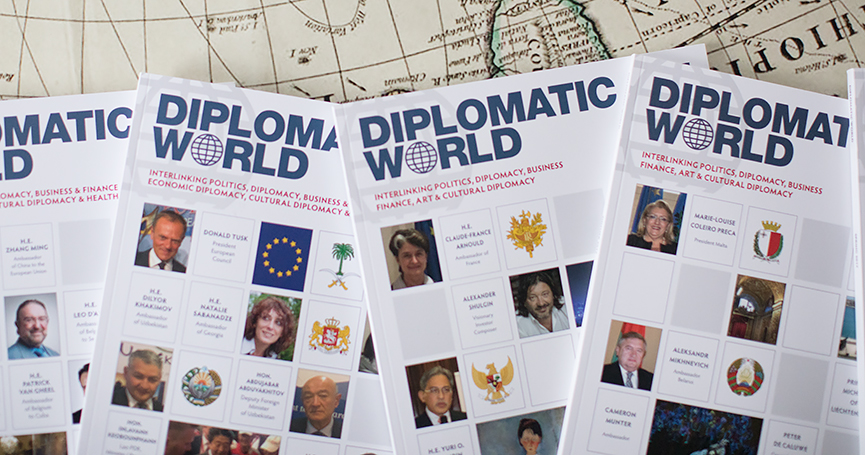 Her son called during our conversation. She apologised and tried to find time to talk with him. She planned several flights, big international congresses, interviews, and meetings with officials, politicians, and famous artists in the coming week. It would be far enough for a month or even half a year for some other person. “Why does she do that? She can do things perfectly fine without taking on social projects, which do not directly benefit”, I thought. At that very moment, I understood that she couldn’t do things the other way. Strange as it may seem, such a full life exhausts you from the one hand and gives energy and inspiration for realisation of your mission from the other hand.

When I was a child, I got to Karavella team led by writer Vladislav Krapivin. Every entrant was to give an oath where were such words: “I will not wait for someone else to stand up for truth”. It seems to me that it were Marina Volynkina and Barbara Dietrich who gave that oath. When my energy runs out, I start whining: “Why should we save the world? There are many people in this world who can handle it; we should mind our own business. Let’s wait for someone else…” “Someone has to do it. We will start and the others will follow”, usually answers Marina Volynkina. Yes, they truly follow. Such as Barbara and other great women who have already signed our memorandum and are concerned about the situation on the planet. They can be politicians, public figures, scientists, etc. Journalists cannot change mass media without support of the whole society. We all understand that media is a powerful weapon used incorrectly nowadays. We can use it in order for people to find the common language, share experience of solving different problems, and inspire one another to achieve goals in various spheres of activity. Speaking about the language: a German living in Belgium speaking English with us suddenly started understanding Russian. It was great! Common view of the world erased both geographic and linguistic borders. 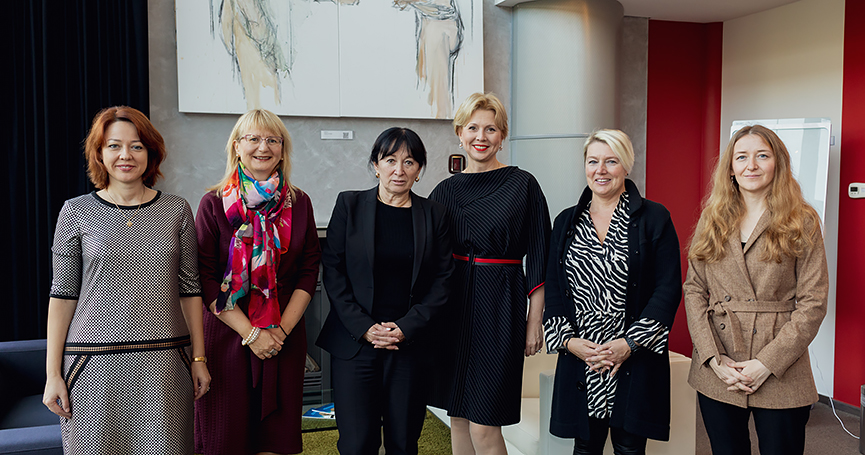 The most correct and immutable truths have a bad peculiarity. They start seeming banal. As a result, they are not perceived seriously and consciously enough. No matter what masterpiece you hang on the wall: eventually you will get used to it. Art supervisor’s task is to not only find masterpieces but also place them into right surrounding and choose optimal lighting and angle. Thus, artist’s message will reach the viewers. In some cases, it is important to rethink the recognised and famous pictures removing the patina of familiarity and routine. Barbara is a supervisor not only in her Living Tomorrow art project but also in our initiative group of experts. Apparently, what can be more banal and important at the same time than a struggle for peace and sustainable development? This is not a type of news that will be all over the front pages of newspapers and magazines across the world. Although, it doesn’t stop being the most relevant topic at all times. How can we make people think about this complicated truth? You will say that it is impossible. Barbara and I together with our like-minders will answer: we have already got used to doing more than possible and we are not going to stop. Who wants to join us?

P.S. The interview with Barbara has failed: it resulted in the text about her mission, which is the same we have. However, it seemed to me that those were the main things you should know about that interesting woman. Of course, I wanted to write about her charming smile, expressive and emotional way of talking, and her journalistic, art, and human creed: “I am a rebel”. She loves to rebut the templates and break the stereotypes. “How could you write about Crimea problem? That is a forbidden topic”, said people to her. “Why not? That topic interests people”. “Why did you interview that politician? He doesn’t share our values”. “That was the very reason I interviewed him. To understand what are his values. Diplomacy should look for points of convergence and build a dialogue based on them”. Yes, diplomacy is not only in the title of her magazine but also in her premise and accurate reconciled phrases. The interview in the conventional sense of the word failed but I think we will find the time and opportunities to talk about much more else than projects and ideas because we are going to achieve great results!